The fact that #Hollywood and #MediaPimps are jumping to convict this woman says we ALL need to look at this MUCH CLOSER!

Daily Beast
Argentinian President Cristina Fernández de Kirchner and Foreign Minister Hector Timerman have been charged with allegedly trying to cover up Iran’s involvement in the 1994 bombing of a Jewish center in Buenos Aires that killed 85 people. Prosecutor Alberto Nisman had drafted an arrest warrant for Kirchner prior to his Jan. 18 death, which was first ruled a suicide and now is suspected of being a murder. Nisman was found dead in his apartment with a bullet wound to the head, one day before he was set to deliver a 289-page criminal complaint alleging a coverup.The posthumously published complaint contains an “extensive record of telephone conversations revealing what appear to be back-channel talks between senior officials looking to trade business deals for an international ‘get out of jail free’ card,” Christopher Dickey wrote. Nisman alleges that Kirchner and Timerman in 2011 told Tehran they would drop efforts to prosecute Iranians in exchange for cheap oil and export access to Iran’s market. Jorge Capitanich, Kirchner’s cabinet chief, called the decision a “judicial putschism” and “an active strategy of destabilization,” the New York Times reports.While the cause of Nisman’s death remains unclear (he didn’t own the gun found on him), he sensed he was a marked man.

“I might come out of this dead,” Nisman said just hours before a bullet was put in his brain.

A judge will now begin an inquiry and consider evidence to decide whether the case should go to trial, according to Susan Ciruzzi, a professor of criminal law at the University of Buenos Aires. Nisman noted in his complaint that the alleged back-door deal had not transpired while Kirchner’s government has previously argued that Interpol had confirmed that Timerman did not attempt to lift warrants for the arrest of the Iranian officials suspected in the bombing.

Read it at Reuters

BY HUGH BRONSTEIN AND RICHARD LOUGH 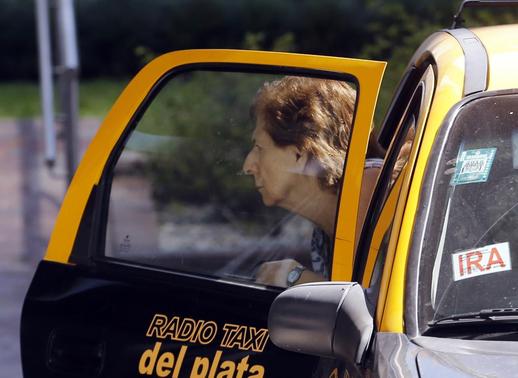 (Reuters) – An Argentine prosecutor on Friday said he was taking over an investigation into claims President Cristina Fernandez tried to cover up Iran’s role in a 1994 bombing, after the previous prosecutor died mysteriously last month.

The appointment of Gerardo Pollicita as the new state investigator on the case ensures the probe will continue after prosecutor Alberto Nisman was found dead in his apartment on Jan. 18.

Nisman died a day before he was due to address Congress on his allegations that Fernandez conspired to cover up the bombing of the AMIA Jewish community center in Buenos Aires.

Pollicita said in a 61-page court filing on Friday that he had seen enough evidence to pursue the accusations of a cover-up.

“An investigation will be initiated with an eye toward substantiating … the accusations and whether those responsible can be held criminally responsible,” Pollicita said in his filing.

The president’s chief of staff Anibal Fernandez said the accusations were a politically-motivated “destabilization maneuver” with “no legal validity.”

Fernandez says she believes Nisman was murdered by rogue state intelligence agents who were fired in December. She says they used Nisman to smear her with “absurd” conspiracy charges and then killed him when he was no longer of use to them.

Nisman claimed Fernandez opened a secret back channel to Iran to cover up Tehran’s alleged involvement in the 1994 bombing and gain access to Iranian oil to help close Argentina’s $7 billion per year energy deficit.

Five Iranians have been accused by Argentine courts of being involved in the bombing, which killed 85 people. They deny the charges.

Iran’s government has repeatedly denied any involvement in the attack.

The Nisman scandal has shocked Argentina eight months ahead of October’s presidential election and hit Fernandez’s popularity. She is constitutionally barred from running for a third consecutive term.

After Nisman’s death, a court ruled that his probe into the alleged cover up should be presented as its own case, separate from the bombing which Nisman had been investigating, legal experts said.

“Seeking the truth is not easy, but neither is it impossible,” she told a news conference. “We are going to strengthen the AMIA unit and guarantee the continuity of its team.”

Nevada Pimp Dennis Hof Accused of Sexual Assault, Won’t Face Charges…One of Those Assaults Was Against Me – The Bunny Ranch Insider!